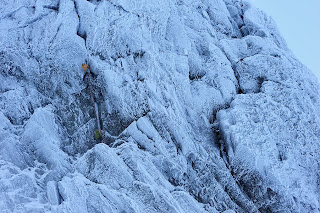 Now entrenched up in the West highlands for the winter months its time to reflect back on some awesome days out south of the border. Over the last few years I’ve always been up in Scotland when Wales has been in condition and had to satisfy myself with reading Baggys blog about people climbing the Devils Appendix and other mega classics. This year things worked out perfectly. I guess living and working in the area certainly helps. Taking the first opportunity Stu Macaleese and I headed up to Clogwyn Ddu to take a look at Cracking up. This is a route Nick Bullock climbed a few years back and is given E1 5b with 2 points of aid in the guide. Nick took 2 days and several falls before the successful attempt resulted after large fall near the top of the route. This left the onsight up for grabs! Having never set eyes on the route before and having only seen one picture of Nick low down on the route the walk up into Cwm Cneifion was a very nervous one. To add a little more pressure Ray Wood was also along to take some pictures of the occasion. The conditions on the crag might have been awesome but the weather was proving less so. Having Stu along as a qualified mountain guide with his ml skills soon saw us stood at the bottom of the crack. Trying to get a look at what lay ahead proved pretty difficult in the swirling mist offering only fleeting glimpses.
A quick scramble to the base of the route saw us both craning our heads back at the steepness of what lay ahead.
The route is a true mixed affair, the first 15ft climbs a small ice pillar stepping off this then sees you pulling through the first part of the crack using your axe shafts to yard off. Way off to the right a small grassy ledge can be seen. All ideas of some sanctuary here are soon dismissed when the wall above it proves too steep to fully stand in a rest position. All sorts of random gear is arranged here before launching upwards again. This is where the dream of an onsight ended in some air time. Totally misreading a hook ended it all.
Lowering to the ground saw a quick discussion about what to do next. With the arms feeling battered and wanting to do the route in the best style possible we decided to return the next day.
Waking up the following morning to better weather, hopes were high the only problem was would the guns would perform? The short walk back into the cwm a bristling white crag greeted us and perfect blue skies. Ray, back with us again was getting very excited with the prospect of getting some awesome photos, I was a little less so, knowing full well what lay ahead.
Arriving at the base of the crag the gearing up was done in silence. Having blown the first attempt, the pressure to get it 2nd go was growing unbearable. I was more scared of blowing the attempt than of the danger of falling off.
With the clear skies my high point was clearly visible, a single cam just below an obvious niche.
Setting off I climbed to the top off the ice pillar, clipped the runners then climbed back to the ground; that was the warm up. A quick change of gloves for a dry pair, engage the guns and climb quickly through the lower section to the semi rest. That was the plan I made in my head and surprisingly the lower section went to plan. Clipping the random runners on the ledge, a quick psyche up and launch up the next section of crack. I quickly reached my high spot and nervously pulled on the same hold, luckily this time it held and a quick succession of poor torques saw me pull into the niche.

Another poor rest and some g 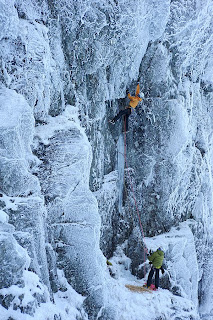 ood gear set me up for the final section of crack. Leaning out behind my head I pulled out onto the headwall frantically searching for any usable footholds. Slamming a cam blindly into the crack my axe found itself on a small flat hold, fully committed, a quick hand swap saw me pulling onto easier ground. For the first time I managed to look round, a quick shout down to Stu to see that he hadn’t frozen to death then a glance across to see ray snapping away to his hearts content. Almost in the bag, I don’t think I’ve ever climbed grade 5 ground so slowly, not wanting to blow it all now after so much effort. A quick belay to bring Stu up, and we were both starring up at the last short pitch and the beckoning sun drenched summit plateau. Stu quickly rattled this pitch off and we were shaking hands on a awesome climb and job well done. An amazing couple of days.
Posted by Andy Turner at 18:11 No comments: