The Winter of my Discontent

Sitting here in with not a cloud in the sky and the sun glinting off the sea, winter seems like a very long way away and to be perfectly honest I’m not even slightly bothered!! In fact this winter has had me feeling like that for most of the time. The psyche just hasn’t been there. I’ve been reading other people’s blogs now and again and seeing updates on facebook of the likes of the youth Greg Boswell, Nick Bullock, Pete Macpherson and Guy Robertson getting amongst it and putting in some fine performances and do you know what I had barely a glimmer of FOMO (fear of missing out – in case you didn’t already know).
The autumn had seen me psyched for the grit and really into rock climbing and the oncoming winter was like a prison sentence looming without having done any kind of crime. The last few years I’ve been psyched out of my mind, with plans for a million new routes and repeats of the hardest routes I could think of……. This year I just didn’t seem to have the inspiration despite not having completed my “Repeat all Dave’s really hard routes – in as good a style as possible” challenge from last winter.
Late November and the inevitable flurry of “is there anything in nick yet” messages began to fly around, people were sounding excited…..I had my fingers crossed that the cold wasn’t coming anytime soon. I was hoping to last out until Christmas without having to dust off the tools – I didn’t quite manage that with a sneaky trip over to and couple of new routes done with the ever keen Baggy and belay duty for another of those keen youths Calum on Traversty. Conditions were short lived and I headed home to the Peak with a mixture of relief and a small glimmer of interest. By this time I had booked my flights to and I knew I was going to have to do some kind of training in order not to look like a complete muppet when I got there. I love training and a few visits to White Goods were fun, particularly when accompanied by the irrepressible Tim Emmett.
Christmas came and went and soon enough I was headed up to for some work, conditions whilst I was there weren’t great but I did have one good day out with Jen Olson on the International Meet, quality route and great to catch up with her. After that I had a weekend of being a model for Lukasz’s photography workshop which meant a tiny bit of climbing and then finished off my Scottish winter by dragging poor Ruth up The Message – perhaps not the best choice for her first route back since 2010, especially with it getting buried as we climbed! The last day up north was spent with Dave Macleod and Ruth – we headed up to yet another unpronounceable Scottish crag to get stuck into Dave’s Roof crack project. I was feeling particularly rubbish and rundown but watching Dave was truly inspirational – it made me realise that I’d pretty much written off my winter through a simple lack of motivation. The route became Castle in the Sky and looks amazing…….. I started to feel the desire to climb filtering through and I was about to head out to .

The trip to was frankly disappointing. I’d arranged to head out with Lukasz and stay with Gordon Macarthur. I’d like to say a massive thank you to Gordon and his wife Becky for putting us up and looking after us. Gordon had been raving about the crag local to him, Bull River Gorge, he’d been involved with a short film made there last year and the film was pretty inspiring. When we got there the film had shown pretty much the full extent of the quality climbing and it was quite limited. A handful of good routes and a very funky ambience, enough to keep us entertained for a couple of days.

Now I had no idea where Gordon lived before I headed out and had assumed that he was quite near to Canmore and the hub of the winter climbing scene, unfortunately he is a bit further out, so we spent a whole lot of time driving around to visit other crags and venues. Lukasz had arranged a photography mission with Petzl for the trip and so he had a whole list of shots that he needed to get and being a total perfectionist getting the shots was not as simple as it might have been and definitely took a whole lot longer than I had hoped. Yes I was getting some recompense as part of the deal which just about covered the costs of my trip but I had really hoped to get more personal climbing out of the nearly 3 weeks we were away. We did manage a small amount of typical Canadian cascade climbing on the Weeping Wall, which was pretty cool and definitely sparked my imagination to come back at a later date. Unfortunately there was a whole lot of snow around and so the big high crags weren’t very accessible and Gordon isn’t exactly a big mountaineer so we stuck to the more accessible crags. We visited the Cineplex – what a venue! Had a blast on Mushasi but after a flake having been pulled off last season (Gordon!! Training too hard!) it needs redrilling to make it possible again. We had a couple of days at a place called Haffner Cave which is pretty steep, was quite pleased to haul myself up Cavemen after a handful of go’s the top out is pretty exciting now that the tree has gone!

I can’t say that it was the trip I’d imagined before I left the UK but it has served a purpose which is to reignite some psyche for winter, I spent a whole lot of time looking around at a huge number of stunning looking crags and routes and I felt that old familiar feeling of “want”, I wanted to climb them, I wanted to have longer to go and explore, I wished I’d been able to change my flights and stay out there for another 3 weeks, but I had to come home for whistle-stop week of work before jumping on a plane and heading out here to the sun for 3 busy weeks of coaching and climbing. Here's a few images of week one in Majorca.

I’m looking forward to the summer, I’m looking forward to getting back into the rock climbing, I’ve got a list as long as my arm of routes that I want to get done, and this stint of sport climbing will no doubt set me up in the best way. Meanwhile I’ve got a few ideas starting to form in the back of my head……ideas for next winter, plans and dreams. It’s funny I just didn’t feel like this at this time last year, last year I couldn’t bear the thought of winter coming again, maybe this year it’ll be different maybe that old feeling will stay, the want will remain……but will it be for Scotland? Who know, not me!
Posted by Andy Turner at 10:52 No comments:

All kinds of randomness.


It seems the UK mainstream press has finally gotten hold of the Long Hope story with articles appearing all over the place, from The Sun to the Telegraph - not a bad range!
All down to Lukasz having signed with some agency (Carters I think it's called) and they have been doing some good work getting the images out there.
Not much news from Canada, the boys seem to have gone off the radar, which must mean they are having probably lots of fun and getting stuff done, did hear something about Weeping Wall and ice and sunshine.......... jealous!

You may wonder where Andy got his love of winter climbing from, well I think my friend Catrin might just have found the answer, whilst flicking through a Rupert annual (1958) of Andy's (I don't think he had it from new.......!) she came across this story - much talk of frozen waterfalls......maybe that was the inspiration?? 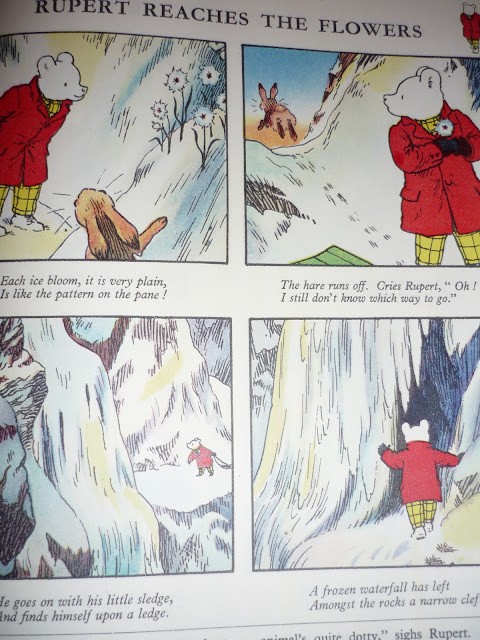