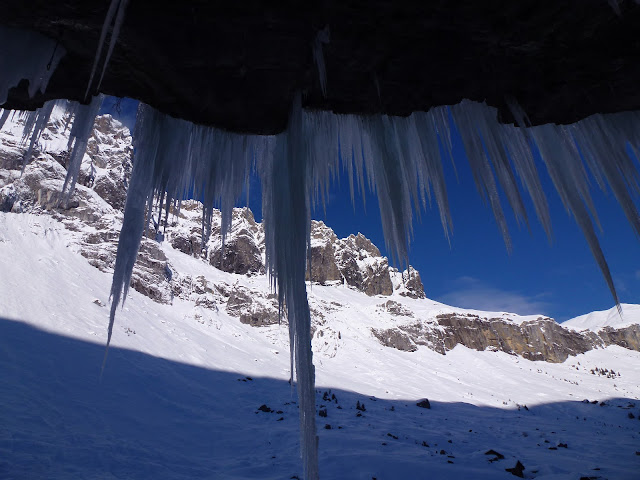 I'm currently at home in the Peak sat in front of the fire feeling slightly less than on tip top form. I'm supposed to be back out in the alps already and cranking some more routes before heading down to Rabenstein in northern Itlay for the next round of the Ice World Cup, but unable to move from my bed for the last 3 days meant a change in flights and heading straight out to Italy tomorrow. They are pretty impressive those Swiss germs - Ruth is less than impressed as I've obviously managed to pass them onto her.

So how was my little tour of Switzerland? Well the journey out was long and exhausting and I wasn't even driving - thanks Matt! We stopped at Eptingen  (http://www.ukclimbing.com/news/item.php?id=66882) but everything was soaking wet and dripping so we kept heading on and got to Usechinen. I visited Usechinen a few years ago and climbed Pink Panther which at the time I was really pleased with, so I had a good idea what the crag was like and what to expect. Quite a lot of walking and some chilly temperatures!

Day 1 After travelling down, I jumped straight onto Twin Towers (M10) after a bit of warming up, I was keen to give it my best shot, but I soon found that there was a whole lot of ice choking the cracks and holds which needed a bit of gentle persuasion to move. Once that was cleared I managed to get it first red point - happy with that. I then spent a little bit of time looking at Matador (M11).

Day 2 Back on Matador and managed to send - psyched! 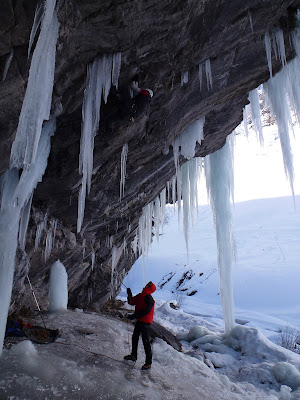 Day 4 Onsighting mission - getting some competition psyche. Managed a rack of M7, M8 and M9's so felt more confident heading down to Saas Fee


We arrived in Saas Fee and checked into our hotel in Saas Grund - all was looking good. Arrived at the competition venue to register only to find out our licences hadn't been sorted out, a few frantic phone calls later and with some help from the lovely people at the competition we were in, numbers issued and able to enjoy the free feed!

Last time I competed at Saas Fee in 2008 it was nothing short of a disaster! I was rubbish, I got totally stressed out and nervous and didn't perform to anything like the best of my ability. This year I was determined to do better. Unfortunately the gods were rather against me, after hardly any sleep (some nerves some snoring roommates) I was feeling a bit dizzy. I put it down to the lack of sleep. I got myself warmed up but could feel the lack of power in the arms, even doing pull ups felt like hard work. Hmmmm, well all I could do was give it a go. I eventually got called to climb and set off, definitely feeling more relaxed than last time I'd been there and more confident. I made pretty good progress but just felt really pumped way too early. I battled with what I had but eventually popped off. What I hadn't realised was that I'd also been judged to have used an out of bounds heel hook a couple of clips lower down from where I'd fallen off and that was my official high point.
As soon as I finished climbing it was like I had permission to pass out and had a few moments over the next couple of hours where I had to sit down before I fell down.
The next couple of days with the journey home were absolute torture, and I apologise to Matt and Si for being a less than fun travelling companion! Not only was I feeling awful but we then drove into loads of snow, took hours, snapped the snow chains,  missed our ferry, got on another one (thank you P&O), drove through more snow to get home - epic by anyones standards!
I finally arrived home, fell through the front door and went to bed where I stayed for the next 3 days.


Looking back I am pretty happy with how I climbed and where I got too, I was not far from qualification to the semi finals which before I went I'd assumed was impossible.  So despite the setback of illness this week I'm hoping that by Saturday I'll be back firing on all cylinders and ready to give it my best in Rabenstien.......http://eisklettern.it/?lang=en

Just a quick one here, Andy is currently on his way back from his trip out to Switzerland. The Saas Fee Ice World Cup competition was yesterday and I missed him on the live stream TV that the UIAA have on their website - boo!
Managed to get home in time to catch Si Chevis who looked to be making progress but popped a tool. Andy was 19th in his group, but more importantly had he not been knocked back down by a couple of clips for an illegal heel hook he'd probably have made it into the Semi-finals so from the little I've heard from him he was both pleased and fed up!

I'll let him tell you about the rest of the trip and big sends at Ueschenin - I think he's pleased with his week. Although not too psyched for the snoring of his companions .......welcome to my world Andy Turner - king snorer!!

Anyway, Petzl have released a little film about their new harnesses - and Andy is in it, not as much as some of the other Petzl team, but check out the credits at the end - second on the bill to Chris Sharma - nice work!!


Thank you Ruth for your contribution! 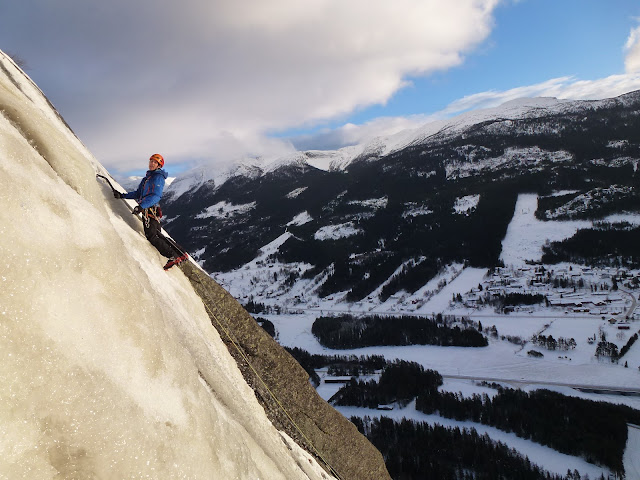 Conditions were not ideal as you know out in Norway and so despite a visit to the base of The Big Drip, we didn't get to climb it - very disappointing.
But we did climb some nice ice and some not so nice ice as things warmed up.
The place is AMAZING and I'm keen to go back sometime soon.
The last day was sooo warm that we spent the day  hanging out at our little chalet and enjoying some sunshine.
Oh and got some training in too....... 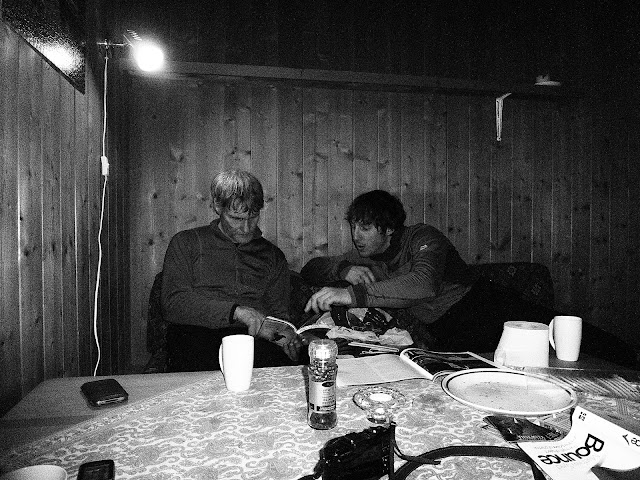 I've been getting some information back from the team out in Setesdal. The first report was that it's been  a bit too cold for fat ice has turned to it's now quite warm and things are a bit drippy!
Typical!!
Day 1 did see Andy and Brian doing a new 300m WI3+ route - no idea of any other details - sorry.
Then they went to have a look at the "Big Drip" - unclimbed, featured in the new guidebook and has been on Brian's list for years. Getting to the bottom they found the first long pitch of ice detached from the crag - the retreat was sounded! Bugger.

They have moved somewhere else in the valley and are now staying in a little chalet in the woods, sounds idyllic if a little rustic! Woodburning stove, outside toilet........

Not much detail I'm afraid, texts are rarely big on information!

No photos either so here's a link to the guidebook.... 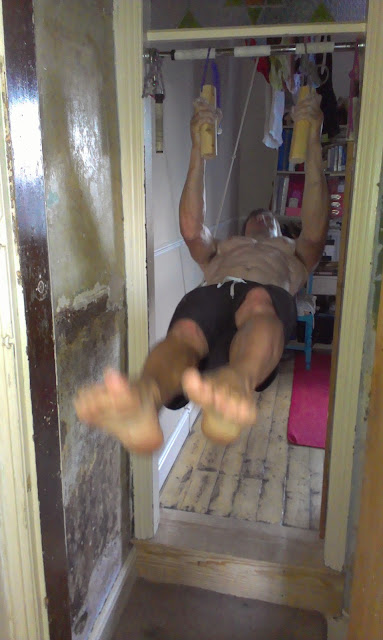 Oh, look I seem to have found something!! Home training folks it's what it's all about!
Hmmm, I think it's probably good I'm going away as soon as Andy gets back........
Posted by ruth at 10:18 No comments:

So Andy is away in Norway leaving me not just in charge of the blog etc. but also having left me all alone for New Year - OK not all alone I've got Mac, which in some ways is actually worse than being all alone! ......time for some revenge I think!

Reports so far from Setesdal are that conditions are not as fat as they'd hoped because it's been too cold to form loads of ice. But it's currently hovering around zero so things should be building pretty fast.
I'll report more when I've got the next instalment.