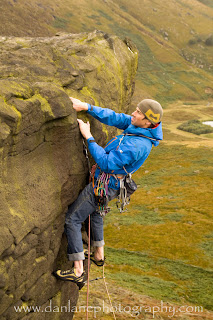 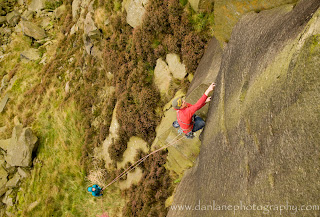 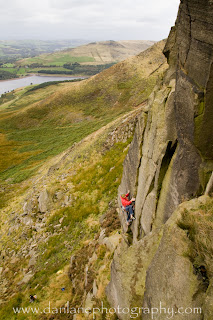 Thought I'd better let you know where the view was from - congratulations to Coops and especially Tommy B who left their guesses - you are right it was Dovestones Quarry, and the Lower Right Hand bit so the only bit that you didn't get quite right was the route! Nice of you to think I was on Bob Hope, but we were on a photography mission with Dan Lane and so he had specific routes he wanted me to do. First up was Ace of Spades at Dovestones Quarry, then Vanessa Hole at the Duckstones (and it really does look like a duck!), and finishing off with Broomstick at the Charnel Stones. The classic at this crag is an E4 slab called  Wastelands - a Steve Bancroft frightener. Looked great but not for a cold and windy day.
All these routes will be in the forthcoming BMC guidebook "Over the Moors" which should be out in time for next summers moorland grit season. (Although I'm sure I've heard that before - but fingers crossed!)
Here's a few of Dan's pictures from the day - ta Dan.
Posted by Andy Turner at 20:37 No comments: 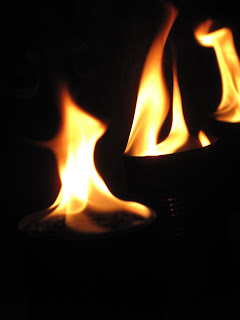 To mark the end of New Mills Festival (don't ask, I have no idea what else went on really, apart from bits of knitting wrapped around lampposts/bikes/even a car) there was a lantern parade. All sounds quite hippy but was actually quite cool, loads of people had created amazing lanterns - including a giant penguin (easily 6ft tall) not sure what variety but impressive nonetheless and came accompanied by bona fida penguin noises recorded in Antarctica.
The parade started in the centre of town and went down the Torrs, along the Millenium Walkway which was all lit with flaming torches, past the crag which had a even lantern climber halfway up Electric Circus. I also noticed that strung in the archway of the bridge was a chandelier of lights all strapped onto the bolts recently placed - good to see they have come in useful for something else. Hmm, maybe that's why New Mills Town Council were so keen!
The parade finished up at the playing field behind Swizzles with dodgy local band White Van Man (some bloke out of Emmerdale apparently) and fireworks. 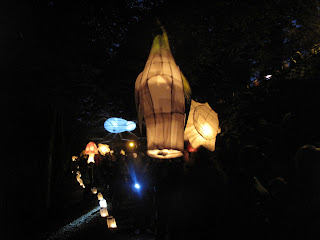 An unusual way to spend a friday evening, and exhausting as I then got roped into giving Ruth's nephew a pretty lengthy shoulder ride - how heavy is a 6 year old???

Anyway, took a bunch of photos so here are some to have a look at. 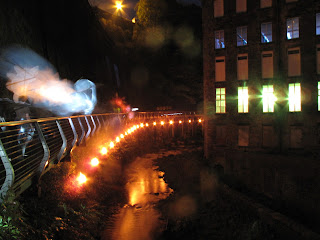 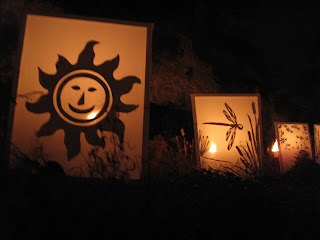 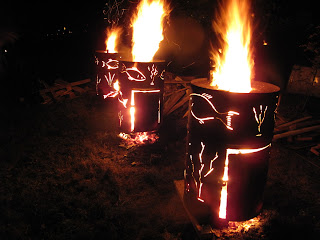 Yesterday I went climbing and this was the view from the bottom of the first route we climbed - not a well know crag or route for that matter but worth doing, as were the others we did. Mac wasn't too keen on the walking what with all the tussocks and bracken that he had to burrow through.
So it's a pop-quiz - which crag and for extra bonus points which route???? 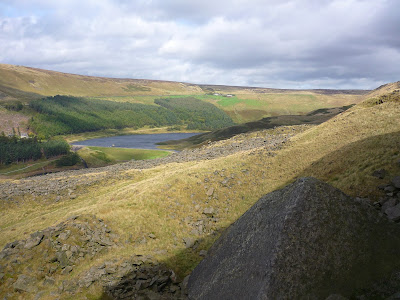 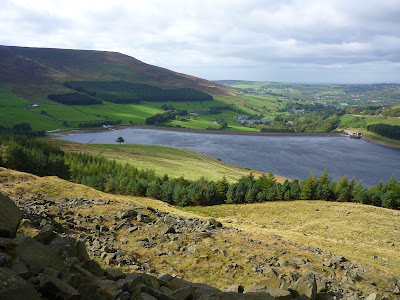 I'll tell you the answer in a few days!

I got a pair of these to test at the end of last winter but didn't get to use them much - looking forward to giving them a good test this year.
This film was mostly shot in Lofoten during the meet I went on with Nick Bullock and Pete Benson back in February just reminds me of all the lines waiting to be done...........maybe I'll get another chance to visit this winter. Fingers crossed!
Posted by Andy Turner at 18:55 No comments: 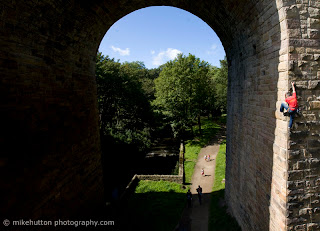 Well, it's been a bit miserable and rainy round these parts this week - particularly helpful when you have just removed the guttering off your house!
Anyway as a little bit of brightness I got sent these pictures by Mike Hutton today from the other week when we were down the Torrs putting in the second lot of bolts. The 3 newer routes on the other pillar (arete about 6a+, left hand route about 6b+ and right hand route about 6b++!) of the bridge are cleaning up well and were dry last night in heavy drizzle - now if the floodlights could just be moved 6ft over ........ 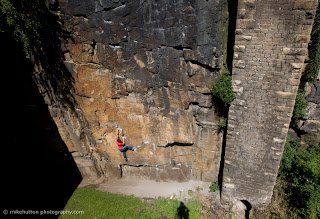 Check out Mike's website here.
Posted by Andy Turner at 11:04 No comments: