BEINN UDLAIGH- BEHIND THE SUN 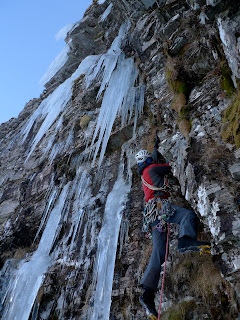 With all this fine settled cold weather we've been having for weeks now it seems it's the winter to be climbing lots of esoteric ice. Dave Macleod and Blair Ffyfe bagging a handful of new lines in Glen Coe over the new year period is testament to that.
In Scotland we're used to climbing lots of snow ice usually plastered to buttresses or gully beds, but this winter has seen lots of new seepage lines given the chance to form.
I've not been to Beinn Udlaigh for a few years now but it
seems to be the place to be at the moment, what with awesome classic ice routes in great condition and scary snow conditions in the mountains.

It was whilst out with Ruth bagging a few classic lines that we happened to walk under the lower tier, I was surprised to see how much ice was bulging out of the cliff. Now I probably wouldn't want to walk under this cliff in summer as the whole thing appears to be a giant Jenga puzzle but with all the ice around holding it all together it seemed fair game.
There was a push a few years ago to see some bolted lines on these lower cliffs to give some sport mixed lines for people to try and possibly train on. One such line was put up called Crossroads which saw a couple of ascents before the bolts were removed.
Walking under the cliff that day I spotted a line of icicles that could possibly be linked together to traverse under an ice curtain that had formed over an overhang. Pulling through that overhang looked like it could be the challenge I'd been looking for.
Enlisting Dave Macleod fresh from his ascent of Anubis on the Ben the day before, he agreed to be on belaying duty for the day.
Gearing up under the route, Lukasz Warzecha a friend of mine who was keen to get photos of the ascent ran round to rig his rope to get some close up shots. The route starts up a corner for 20ft using a mixture of ice, turf and frozen in blocks before traversing 3 or 4 large icicles for another 30ft to arrive under the roof. From this roof a large ice fringe made up of 3 more large icicles was draping. This was where I wanted to go. After arranging a couple of cams in a horizontal break you could step up high enough to knock the middle icicle out. This enabled a passage out onto the front face which proved to be pretty scary as a fracture line appeared in the icicle as I hit it.
Pulling onto the front of the icicle reminded me of some of the sport mixed lines I'd done the last few years in Europe.
This route is called BEHIND THE SUN (VII,7) and I would like to dedicate it to the memory of Chris Walker, a friend who unfortunately lost his life in an avalanche a few days later whilst guiding in Glen Coe. 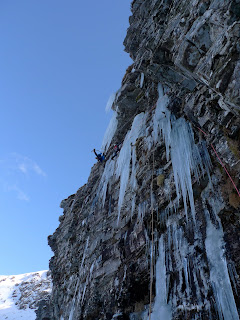 Thanks to Dave Macleod for the photos.
Posted by Andy Turner at 22:03 No comments: 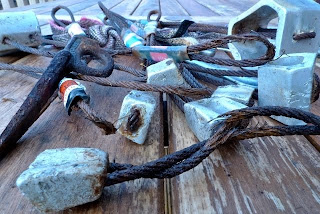 Back in 2001 Neil Gresham caused a controversy by firstly top rope practicing then preplacing gear in a route prior to its first ascent which was to become the Tempest. This has and probably will always go against what Scottish winter climbing is all about. The route soon got another ascent in the same style. At the time I was just getting into winter climbing and remember all the hype and Cubbys' photos of Neil on the final ice smear.
The route has stood untouched ever since then except all the rotting gear that was left in it.
Several people have said over the years that it would be a big leap forward for someone to come along and give it a ground up ascent. Over the last few years this has been niggling around in my head. Last autumn whilst trying to come up with a plan for this winter, the Tempest came back onto the radar. I was hoping I could dispatch some other routes over in the northern cairngorms first for preparation before trying it, but with the way conditions have been over there the route all of a sudden found itself top of the list.
Knowing the route was fully laden with rotten gear it took 2 attempts by abseil to get most of it out; the first time having climbed Scabbard Chimney, the second by Spectre. With every piece of gear I tried to retrive the wire broke when I pulled on it. The last 2 bits of crucial gear before heading up the ice smear both broke but were so deeply welded into the crack that they were impossible to retrieve. This lead to a couple of problems: 1, the onsight was definitely gone and 2, how was I going to protect the last run out section?
The day came to head up there. The hardest thing about trying hard routes is finding someone patient enough to stand at the bottom for hours on end. I managed to convince my landlady Catrin Thomas to do the job.
Having to break trail into the coire that day was the first hurdle. Eventually arriving at the bottom of the route after much wading the enormity of the job lay ahead. With the route under a fresh coating of snow and the ice smear glistening above I set off. Things were slow as they always are. The route never being obvious, lots of dead ends. Wherever the route looked easier the holds were often slopy and unhelpful which made for lots of downclimbing. The route is not steep or very strenuous but has lots of deadends and tenuous holds. After several hours of climbing I arrived a place where I at last managed to get some good gear in. I then had the old problem of leaving this bomb shelter of gear. This was about 3/4 of the way up the route. Looking down at my harness to see only a couple of quickdraws left didnt fill me with confidence to continue. After a couple of forays upwards I bottled it and decided to retreat. Totally gutted I pulled the ropes vowing to return as quick as possible.
Finding another willing volunteer I headed up a few days later. The lower part of the route went smoothly to my previous high point, this time with gear in hand I managed to shuffle upwards into a niche just to the side of the ice smear. After half an hour of trying to weld various dubious pieces of crap gear into doubtful rock I stepped out onto the ice. Eyeing up the 2 broken wires sticking out of the ice I managed to weld 2 of my own in the same crack. After several uncommitting trips up the ice and then back climbing to the niche I eventually took a deep breath and blasted up the ice to what felt a very committing topout. The thought of a tool ripping in poor neve to be sent hurtling backwards onto poor gear in an icy crack wasnt very appealing. After a few nervous swings I was stood on the finishing slopes with only a sprint to the abseil point left.
A very cold Luke followed me up the route, beaming as he came over the ice to join me on the belay.
A great day out.
The hard thing now, what grade? Intially given an M grade(M9) for the style it was climbed in.
The climbing was at no point mega strenous but very tenous. Although a different style of climbing it felt just as committing as Cracking Up down in Wales. At any point high on that route if id fallen i would have gone a fairway. I agreed with Nick Bullock on his grade of IX,9 for that route, so trying to keep things relative I would guess hard IX,9 maybe X,9 at a push for the hard fought for gear and run out sections. As always things always change with subsequent ascents, as people get beta on the route and placements improve?
Posted by Andy Turner at 10:51 1 comment: