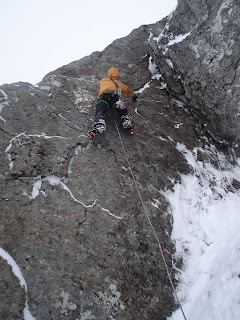 It was thursday morning and the phone blerted out the arrival of a text message. It was Ian Small wondering if I wanted to climb the next day. Ian was obvioulsy keen to get something done as he normally works mon to fri. Some excuse to the boss about a boiler was the order of the day. Id been keeping my eyes on the weather and had been under Carn Dearg buttress a few days earlier with the PETZL team and knew things were snowy. The thought of Sassenach came into my mind. Id tried this line the previous winter with Steve Ashworth in a raging storm when a break down in communication and difficult climbing at the end of pitch 2 saw us rapping to the ground.

Knowing it would take a strong team to get up anything on this buttress Tony Stone was also enlisted.

With open minds and aching legs we set out the following day up towards the CIC hut. This took longer than usual as someone in front who'd done an awesome job of trail breaking in the at times waist deep snow made a trail like a rabbit caught in the headlights. Looking over on the way it was obvious Sassenach wasnt going to be possible.

After several cups of tea in the hut and we reluctantly decided to wander upto Centurion, this was about 8.30am so not really an Alpine start for this kind of route. Pete and Guy did the 3rd ascent last winter and had an epic as the route was heavily iced. We were climbing in similiar weather conditions but the route proved alot easier with little icing but a good covering of snow.

The whole day passed like a dream. Climbing with 2 folk who climb at a similiar standard to yourself just takes all the pressure off. Although it was still a tiring day it was all very chilled out. Topping out in the daylight certainly helped the scary descent down Ledge route in spooky snow.

Whilst taking time out over the next couple of days the weather kept raging. With increasing energy levels the psyche for Sassenach returned. This is a route that needs such specific conditions to come into condition. The whole of the Ben can be plastered white after a storm but that part of Carn Dearg always stays black. What it needs is the 'Perfect Storm', NW Gales force winds and loads of snow. Inevitably this means you end up climbing the route in these conditions which isnt something I was looking forward to. 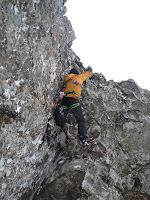 With Tony Stone enlisted again, we headed up towards the hut. This time looking across the whole buttress was getting a blasting. GAME ON.

Deciding this time to forego the brew in the hut to save time we geared up under the route in what felt at times like standing inside a washing machine with ice and snow coming from all directions.

Tony quickly dispatched the 1st pitch, leaving me stood contemplating the struggle above. Last year on this pitch I ended up climbing it with 2 rest points as the gear was so strenous to place.

On retreat several pieces were left under the roof that i couldnt reach.

When Don Whillians first led this pitch he used several pieces of aid. He also said it was the best pitch he'd ever lead. That soon came apparent why. Theres no useful footholds anywhere. On left wall everything slopes the wrong way. Clipping the frozen friend and bulldog I placed the previous winter it never crossed my mind that the friend wouldnt never have held a fall. Trying to remember any useful holds was useless as ice had changed the whole appearance of the pitch. At one point my feet ripped and I was left hanging with my feet dangling in space. Ive never understood the use of power screaming but i found myself screaming my lungs out just to force me on. Several sketchy balancy moves later saw me stood relieved at the base of the chimney, the next problem. 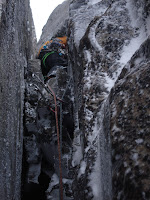 The description read ' good old fashioned climbing', and when Whillians is involved your sure to be in for some fun. Tony set off slowly getting higher and higher, and further and further into the mountain. The chimney was drawing him in, at one point he had to take his helmet off just to turn his head to see where he was going. I think a good old gritstone apprenticeship was the order of the day. Eventually the thrutching ended and a belay was found. The rest of the chimney and climb passed relatively stress free other the the fact of darkness drawing closer and closer. I managed to climb some beautiful icy grooves to the summit of the buttress just as darkness fell. Perfect timing.

Normally Id be over the moon with completing such an ascent but id already agreed to meet Ian Parnell who was on a day mission from Sheffield for a revenge match on Beinn Eighe.

Youll have to check out Ians blog for a report of that day as it all passed in a blur of sleep deprevation.
Posted by Andy Turner at 11:50 1 comment:

Wrapping up the Winter 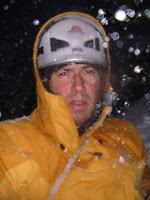 Sorry folks I apologise for not keeping this space upto date over winter. Living between the back of my VW Transporter and peoples sofas wasnt very conjucive to being inspirational. Thanks to all those whose sofas I surfed over the past few months.
Ive now decided to quit Scotland for the winter as things have now gone a bit thermal nuclear, and the prospect of work looms on the horizon.
Its been a week now since my last climb which has given me time to reflect and recover from what was a very busy and productive week.
Ive learn over the years going into a Scottish winter to keep a very open mind about your aspirations. As we all know things can go from desperate to amazing within a couple of days.
Deciding to take this winter off from work wasnt a hard decision but staying motivated for the duration often is. The thing it gives you is the ability to be in the right place at the right time to be able to nail a project.
Having had an amazing start to the last years season with 'The Secret 'things were taking there time to get going this year what with injuries and illness.
But things as ive said can change so quickly, and to have the week I had last week makes all the sacrifices worthwhile.
Posted by Andy Turner at 11:20 No comments: