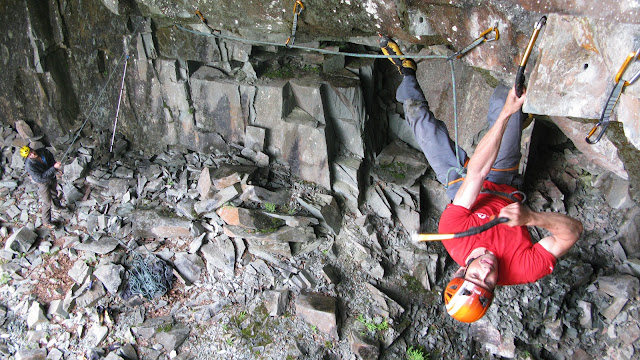 After the trip to Masson Lees I have been feeling quite excited by the prospects of getting strong for the winter - I know it's only July but winter seems a whole lot closer than it should so it's good to be prepared I reckon!
I decided that it was time to take a trip up to the Lakes and check out the developments at The Works ( near Hodge Close Quarry). Paddy Cave, Brian Davison and collective have put in a whole load of work creating a dry-tooling venue - a fine venue they have created.
There are about 20 routes spread from M4-M10 and with a good variety of angles too. More information on Paddy's blog at www.mountaincircles.com.
I headed up with Si Chevis and a car stacked with pointy sharp things and we had a brilliant day. After stopping off in Ambleside and a call in at the Epicentre to get some more info from Steve Ashworth, we managed to get hold of the man himself, Paddy who met us at the crag, eager to show us around and encourage our attempts. 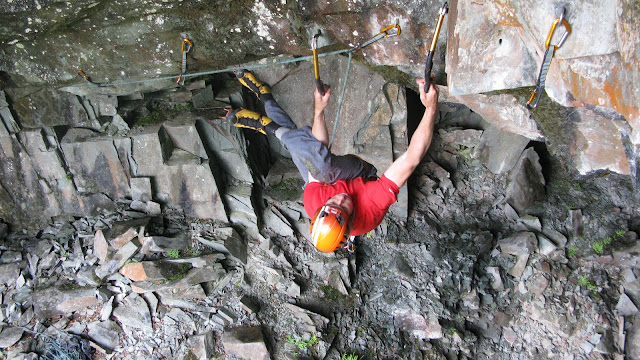 We started off with the routes on the Industrial Sector (M4-M6+) and then got involved with the super steep First Blood - now this route has been given M9 in the topo - but what I learned was that i had been climbed with heelspurs - dubious tactics!! So it's a wee bit harder than that really - probably about M10. Really good upside-down climbing with plenty of Fig 4 moves to get yourself in a tangle with. Managed to get pretty high on the go I had but I was also super psyched to have a go on the "project". Another classy route, following a crack for approx 25ft before puling into a groove to climb up to the lower off - another steep one and potentially could be joined with First Blood in the future to make a brilliant long line.
By the time we'd all had a good thrash around on these lines, we were both pretty pumped and Simon needed to get home. 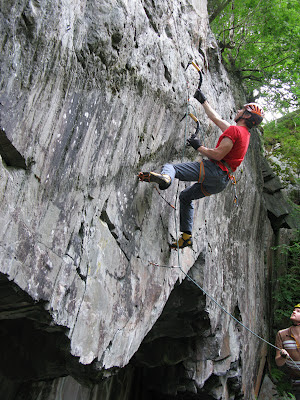 Really keen to get back up there in the next week or so and get the routes done - and the best thing is it doesn't matter if it rains!!


Big thank you to Paddy for the photos.
Posted by Andy Turner at 09:54 6 comments: 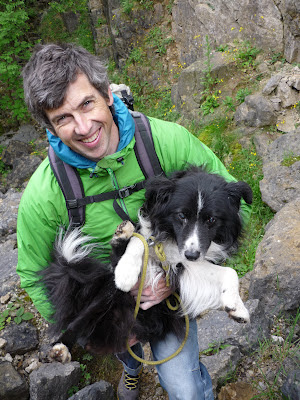 The blog has been pretty quiet these last few weeks - and the reason is that life has been pretty quiet too! As Ruth so nicely mentioned I've been away up in Scotland working for the last couple of weeks and by some small miracle I actually got better weather than down home in the Peak. Typically it was mostly dry on work days and then rained on my days off. So a couple of visits to Ratho, one to Dundee Wall and then a single day out on the rock in Glenfinnan with Kev Shields. Had a bit of a play on one of Dave Macleod's slab routes which whilst not super hard would undoubtedly be super scary. Along with a few rides out on the bike that was my trip up north.
Now that I'm back south the weather has a been well rubbish - as evidenced by Cliffhanger getting cancelled last weekend due to the site being water logged! But in between the deluge I've had a couple of sessions out in the real world. One of those involved the tools and some dry-tooling at Masson Lees. A good venue with some super steep upside down land climbing. I managed to knock off the current crag classic Sub Rosa first redpoint and then managed to fall off the top of a project by having sweaty hands and not being able to grip my axes!! Poor excuse I know, will go back and finish it off sometime soon. I'm starting to get psyched for the winter already - probably because summer isn't much like summer. And I'm thinking that Masson Lees could well be my venue of choice for getting strong.
Mac however is not getting any stronger and needs a lift out over the boulders these days - bless him.

Just been sent these photos by Mike Hutton - thought I'd share them! Taken somewhere on Lewis when there was some sunshine............. 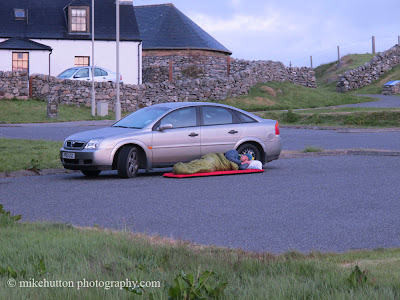 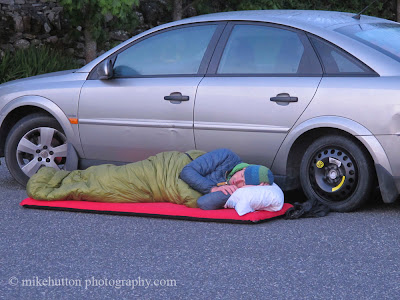 Ahhh bless, doesn't he look peaceful!!!
Currently Andy is actually working up in Scotland - it's a shock to the system, he'll probably need a month off to recover!
Posted by ruth at 19:00 No comments: