International Press - have a look at these!

Looks like I have gained some international press cuttings - absolutley no idea what most of it means, my polish and spanish skills not exactly being top notch!
I'm sure it's all very complimentry! Ruth was quite pleased to get a mention too. So if anyone has amazing translation abilities do let me know.

Not quite got the photos captions right on this one, the shot which is a Mountain Equipment Advert is actually taken on Cracking Up. All good for M.E. anyway!
http://wspinanie.pl/serwis/201012/15-Cathedral-X-Andy-Turner.php

So have a Happy Christmas everyone and hope to be back with some news before new year.
Posted by Andy Turner at 11:25 4 comments:

Apparently there have been some problems with the new Nomic and Ergo griprests - not had any trouble with mine yet but I'll be keeping an eye on them. Petzl have got some information on their website explaining the difficulties and with a guarantee that they will replace the tools when they have got a redesigned version produced next year. Sounds pretty fair to me.

Have a look at their pages for more information - HERE
Posted by Andy Turner at 16:13 No comments:

It can't be often that there is too much snow in North Wales, but it does seem to be the case right now. Perfect conditions for some amazing skiing, Catrin has been out in the last couple of days, here's a couple of her pics, you can see more on her blog 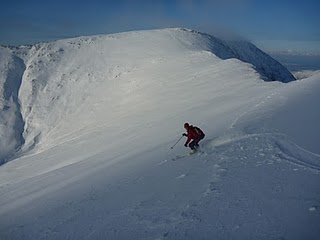 Looks amazing! Whilst she was out putting in these turns I set off with Nick Bullock and Tim Neill to try and climb a route on Crib y dsygl. We trudged in through deep snow, and as we got closer to the crag it became apparent that it was really windy and all the soft powdery snow had been blown off the crag! Think we probably found the only spot in Snowdonia which had suffered these condition. Anyway, the short version is that we all swore a bit and then walked home again. Reaching home just in time for One Man and His Dog, I think Catrin had a significantly more memorable day than we did. 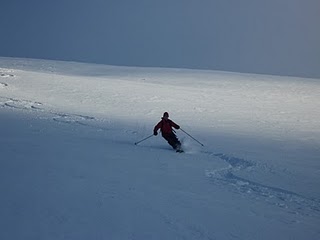 Temperatures are staying cold which just means the snow is not going to be turning into perfect bomber neve, but does mean that the ice routes are starting to form up again. Central Ice Fall and Cascade are looking like ice instead of the black crag of last week.
I am admitting to a lack of commitment to welsh winter and heading back to the Peak for christmas, with some hope that conditions in Scotland will turn just perfect around the new year for some more cranking.
Posted by Andy Turner at 16:11 No comments:

Not much to report at the moment, I've actually been having to do boring things like work and go on a First Aid course. Luckily this has coincided with rubbish conditions for anything else.
Last night was the Plas y Brenin christmas party up in Capel Curig. We decided to take the van as a backup sleeping place and had to use it not due to excessive alcohol (well not on Ruth's part anyway) but due to excessive snow fall, completely bucketed down all night. After digging the van out, wheel spnning out of the car park and eventually making it out of Capel it has taken ALL DAY to get back to Brynrefail which should be a 20 minute drive - epic!
On the positive side, as we had to drive the extra long way round it meant I was able to call in and pick up my shiny new reading specs - the household have taken to humming Austin Powers music at me...... buggers!

Anyway, Lyon Equipment have finally launched their new webiste, there is a genius error on my profile section which suggests that I can deep water solo 8b+ - I expect it'll get changed soon.
Posted by Andy Turner at 18:46 No comments:

Snow has melted but the dry tooling is in condition. 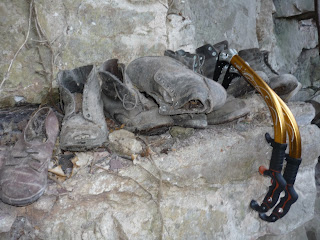 Yes, the temperatures have gone up and all the low lying snow and ice has gone over here in Wales. Looks like there is still some hanging in high up and peole have been climbing on the Black Ladders this weekend. Check out Baggy's Blog for more info.
Also sounds like some of the snow has gone in Scotland which could mean that the Northern Corries are climbable without having to dig your way to the routes.
I've spent the last couple of days sampling the delights of dry tooling in North Wales, yesterday was an afternoon on the slate with Nick Bullock, where we did a few laps on Ibex (M6 - we reckoned), then it went dark!
Today Nick, Rob Greenwood and I headed down to White Goods, you can find more info and a link to a topo at the white goods blog. We managed a few laps on Jaz (M8) to get warmed up, then moved onto Tumble in the Jungle (M9) and finished off with Rob Gibson's new route White Goods (M8+). - PUMPED!! 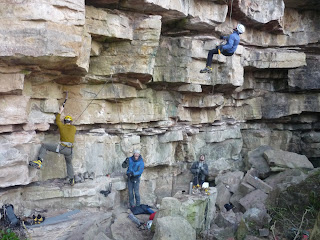 It has also been a chance to have a blast with the new Ergo tools which has been interesting - very different from my Nomics. Very aggressive and will take some getting used to, they definitely felt better on steep stuff, which is what they are designed for -  luckily I have some lines in Scotland in mind for them! 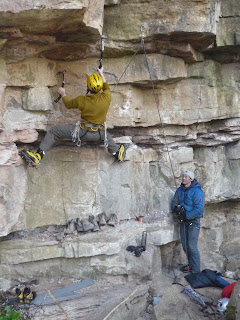 Here's a film that Lukasz made yesterday about his and Andy's epic day out wading.
Enjoy it!!
Thanks Lukasz.

Wading, wading and a bit more snow to wade through.

Just spoke to the boys up north, not team happy today! They decided to go and check a route out, not telling you which one or where because I might get a proper telling off! Anyway, basically after wading through knee high (at least) powdery snow for 4 hours, they arrived at said unidentified route to find it not white, not in condition and with not enough energy to climb it even if it had been!!
They are now heading south - and having just heard a traffic report on the radio that's not going to be a whole heap of fun either!

Oh dear might need to have a lot of tea and sympathy ready for their arrival, especially if they end up having a night in the van.

Ah well, a good route done and some conditions in Wales to look forward too.
Meanwhile here's a picture of Andy and some of the team Petzl wads in kilts just to keep you all entertained. 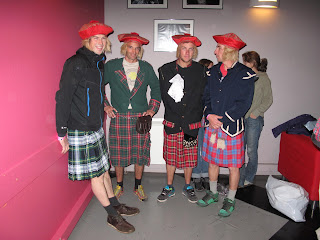 Andy and Lukasz met up with Donald King today, fresh from his ascent of Satyr in Stob coire nan lochain. Both feeling a little tired after yesterdays efforts and seeing that there was a chance that some of the Glencoe ice would be in condition, Andy, Donald and Lukasz decided to head for Blue Riband on the side of the Aonach Eagach.
Sadly only the first couple of pitches were in condition, but they had a fun climb before abseiling off. As great minds think alike they were joined at the bottom of the route by Al Halewood and friends. Check out Al's blog for some film and photos. Quality old school ice axe wielding from the Turner, who had given his shiny Nomics to Lukasz - don't want to be damaging those hands otherwise he won't be able to take such great pictures! Have a read of UKC's interview with Lukasz.

All being well there may be time for another adventure tomorrow before the boys head back south and then over to Wales. But on the positive side looks like everything is in amazing condition over there at the moment. Matt Stygall and Adam Hughes had a fab day doing Central Ice Fall and then nippng round to Ogwen and scooting up The Sting. See more on Adam's blog.
Posted by ruth at 23:03 No comments:

Hello again folks, once more Andy is up in the frozen north and I've just had word that todays project has gone according to plan.

The second ascent of Dave Macleod's The Cathedral X,11 on the Cobbler has been completed!! Good skills that man!

Kev Shields deserves a massive thank you for belaying and braving the freezing temperatures, for the second time on the route. Andy had a go at it a couple of years ago and fell off just getting around the end of the roof, but today everything went super smoothly.
He says that he got up to the back of the cave and couldn't remember any of the holds from his last try (which I can believe knowing what his memory is like after 5 minutes let alone a couple of years!), so he headed out for a look, got the feel of it all and then climbed back into the back of the cave for a shake out before launching the successful attack.
When I spoke to him they were heading for the pub for a celebratory shandy!!

I'm hoping that I'll get sent down some photos as Lukasz Warzecha  and Suzy Devey were dangling around somewhere, I'll update asap.

Not sure what the plan is for tomorrow, but I'll keep the blog updated as soon as I have more information.
Posted by ruth at 17:04 No comments:

This could be my first trip of 2011. Had an invite so really hope to take it up. Was there a couple of years ago - it was great! Anyone who is keen to check out the climbing around the area should get down there.
Posted by Andy Turner at 21:16 No comments:

Just a few weeks ago I was writing about getting out cragging around the Peak and mentioned New Mills Torrs.
Last night I was shuffling around New Mills on my skis, who'd have thought that a ski approach to the Torrs would ever happen!! 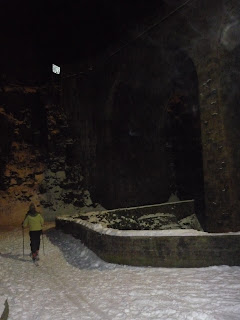 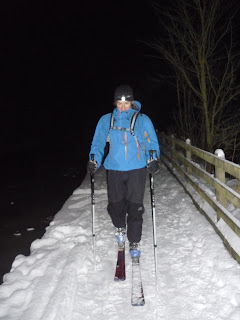 Had thought about applying for the guide scheme once upon a time, but with skiing skills like this - maybe not!! Don't think I was bonding with the planks!!
Posted by Andy Turner at 13:41 No comments:

Thanks to everyone who entered the competition to win a copy of The Pinnacle.  The answer was of course Smith's Route. Nearly everybody got that right, but the lucky winner who got pulled out of a wooly hat is:

Your copy will be winging it's way to you very soon, although the snow might slow it down a wee bit!
Posted by Andy Turner at 14:02 1 comment: