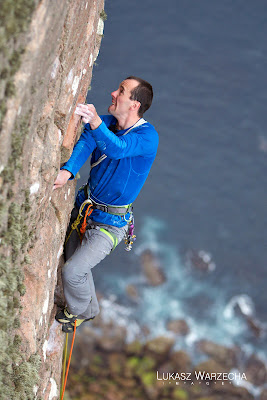 Lukasz has just sent me down these photos and Andy has promised to put pen to paper (well finger to keyboard) later to tell you about his experience - all I'll say is that it wasn't as bad as he'd been expecting - not as scary and that he actually enjoyed the adventure - with only a bit of swearing thrown in!


Just found this little bit of film of Hotaches' Paul Diffley interviewing Andy prior to the climb - hear what he had to say and watch him suffer the midges! 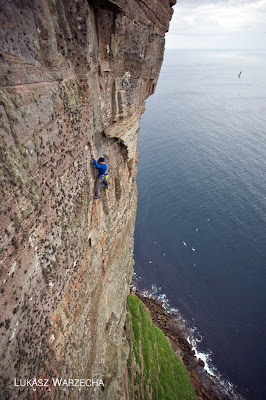 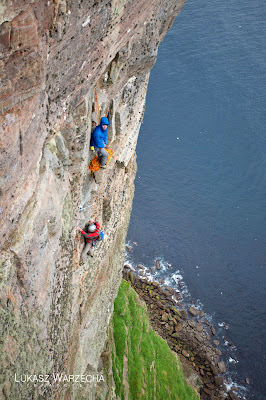 The last couple of days on Hoy have dawned drizzly so the boys haven't attempted the Long Hope Route. Andy managed to snatch a couple of routes with Mariam on Sunday, somewhere near the Old Man of Hoy and he and Dave headed to Rorra Head yesterday and ticked off a couple of new routes. Dave's lead was approximately E3/4 6a and called Slick John and Andy thought his route was about E2 5b and he hadn't thought of a name!!

This morning however, I got the text message to say that they were walking in under grey skies and going to give it a go. Not heard anything since so I have to assume that they have made an attempt and retreated or they are still on it and hopefully nearing the top.............will just have to wait and see. Will of course post as soon as I know.

Meanwhile back in the real world James Thacker and I have been working hard to get Andy's new website up and running and looking pretty swish. An absolutely MASSIVE thank you to James who is a whizz with all the technical stuff. Go check it out and let me know what you think.
Posted by ruth at 18:26 3 comments:

As is usual when Andy disappears off on his adventures he leaves me in charge of the blog......
So here's part one of the Hoy adventure:
After a long journey broken up with a very short night in Edinburgh at Paul Diffley's house, team big white van of Andy, Lukasz and Marium arrived on Hoy and at the plush pad set up by family Macleod and with massive thanks to Mountain Equipment. Yesterday they all headed over to St John's Head to get started with trying to get all the rigging in place for the intrepid film crew.
Andy was keen to get the first abseil over the top out of the way and can confirm that he was right to be terrified - was "well scary". The initial terror of abseiling into the abyss is now over and they have been concocting ways for Andy to complete the crux pitch - ie. how is he going to jumar up in the event of not actually being able to climb it? The first plan was to jumar up one of the half ropes that Dave will be leading on whilst Dave took in on the other - hmmmmm jugging up an approximately 8mm rope - not ideal! Today's plan involves a fixed rope and a massive swing out into space............we will see what the final plan is when he gets there. He might suddenly become superhuman strong and just climb it - it's amazing what fear does to a man!
Anyway, check out a couple of photos from yesterday on Lukasz's blog.
Loving the "Old Man" shot.
Posted by ruth at 18:34 3 comments:

A couple of months ago I got a very strange e-mail. Dave Macleod got in touch to ask whether I would be psyched to head up to Hoy with him and get involved in his attempt to climb the Long Hope Route on St John's Head. This route has been his project for a couple of years now and he's hoping that this trip will be the final push - especially with Hotaches' Paul Diffley coming along to film. Check out Dave's blog for his latest photos from  a trip up there last week.
My first reaction was to think - f******g hell, no way you are getting me on that crag - it looks completely terrifying!
Why me? Surely there are better rock climbing partners to get along?
My next thought was - maybe he's tried everyone else?
Or maybe it's because I'm supposed to be reasonably competent at rescuing myself and Dave if things weren't going to plan?

Anyway after much speculation on my part and some pretty persuasive arguments from Lukasz and Ruth I found myself saying yes - and that's when the panic set in!!
I've been trying to climb lots and lots - although it's a bit tricky to train for 480m sea cliffs, particularly in the Peak District!

The week has finally arrived and on Wednesday Lukasz, Marium, Mac and I are heading north to begin the adventure. First stop Edinburgh, to meet up with Paul, Guy and Matt - team film, and then on up to proper north-shire and the island of Hoy. Dave, Claire and Frieda Macleod should already be in residence at the Mountain Equipment family cottage and the hard work of lugging kit around begins, and then the terrifying bit of climbing will be upon us - hope Dave is feeling fit and strong and good at building solid belays!! 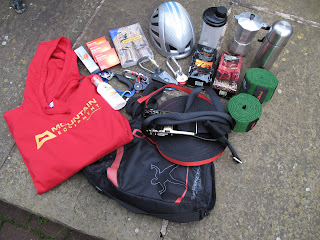