Merry Christmas and a MASSIVE THANK YOU


Christmas is finally up on us us once more and I’d like to take the chance to thank my sponsors who’ve supported me and kept me alive over the last year. (That’s Lyon Equipment with Petzl, Beal, La Sportiva and Julbo and Marmot clothing a recent  exciting transfer - so a thank you to Mountain Equipment too for their support over the last few years)

The Ice World Cup events and the chance to go to the Olympics in Sochi have been a major goal for me over the last 8 months. It’s a totally new challenge for me to compete with some of the best competition climbers in the world. A totally different experience to suffering for hours on end in Scotland.
To help me get my aging body into shape and keep it that way I’ve had to enlist several amazing friends who’ve given their time to help me with my dream.
In no particular order they are....

Tim Budd: who’s put me through my paces to build my strength and fitness up and has refrained from laughing too much when I’m struggling swinging kettle bells and the like around.
Matt Pigden: The whole of last year and the start of this one ive struggled with neck and shoulder problems with my climbing often resulting in many days off with bad headaches. I was referred to Matt by Becca Dent who I’ll mention in a minute. He’s dealt with several of the GB bouldering team over the last few years with massive results, Shauna Coxsey being one of them. After having dental treatment the problems eased and finally allowed me to train to my full potential.
Rebecca Dent, when I first started seeing Becca a few years ago I’d just come out of a winter season where I felt wasted. I was just on my knees walking in to climb. Since then using a controlled diet and careful monitoring I’ve put weight on which has enabled me to recover way better and faster than before and so has helped me train more.

I’d also like to thank the BMC who have recognised Ice Climbing as being an official GB Team alongside the bouldering and lead teams - a big step forward and one that has really helped to get some momentum behind us - there are 10 members of the team including 2 youth climbers and we are all going to attend at least one round of the World Cups - amazing.

Leading up to this season it became apparent that it was going to cost me a fair amount to do all the World Cup events plus the Olympics. Way more than I could ever afford. I decided I needed help. I reached out for corporate sponsorship with some success - a big thank you to DryICE Tools, Jagged Globe but after a little bit of nudging from various friends I then started up a donations page on the web which had great success. It started off pretty slowly but once people were aware of the page the donations flooded in. An incredible response from friends new and old, total strangers and extended family too.
There are way too many of you to thank individually on here but a massive THANK YOU from me as you’ve help me realise my dream.

As competition season get’s rapidly closer its time to put the finishing touches to my preparation. All summer I’ve been looking for a venue to add the comp style prep I desperately need. We tried Blackpool, which was amazing for the length of routes and angle but the holds kept coming loose. The wall really needed to be ply clad and with t-nuts to make it work. That way we could kick in as well. Lots of sessions at the Works and White Goods followed just trying to get the mileage in. I was still seeking a venue close by though that I could use anytime of the day so once the dark nights started creeping in I could step up the pace. Stand up Alan and Sharon at Rope Race in Marple, Stockport. The wall where I first started climbing 15+ years ago. They had a downstairs bouldering room which wasn’t getting used that much and were happy to hand it over for us to dry tool in. The added bonus for them was it was something else for their customers to use.
A few furious hours of setting and the wall was ready to go.

As if by magic an old friend of mine Scott Muir got in touch shortly after. He’d just designed a set of wooden holds for his climbing company ‘Dream Climbing Walls’ and wanted someone to test them and give some feedback. I’ve known Scott for getting on ten years I’ve never seen anyone like him for the psyche to train, he developed prototypes for what became these holds when he was training to compete.
The holds came through the post in 3 big boxes a couple of days later. Unwrapping them I was gobsmacked at the amount of time and detail  he’d put into making these holds. They were things of beauty which is hard to believe for something made out of ply. I was scared to use them they look so nice. I must say I was a little reserved at first how well they’d sell, as surely it can’t be that hard to make wooden holds at home yourself? But after 5 weeks of using them there my favourite holds on the wall. They give you so many options with stein pulls, side pulls, slots etc and the beauty is if you really want to get worked these things are what you need. The placements in the holds are so positive the first thing to go is always your arms. Why is that any good? Well if your trying to get really pumped the last thing you want to do is fall of a marginal hold a few minutes into your circuit and loose all the pump you’ve built up. 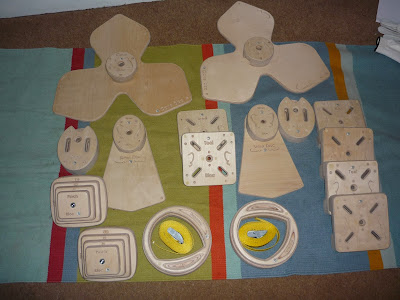 The holds are now starting to look a bit less shiny and perfect, they’ve shed their  sharp edges - now there bedded in you can really go for those big moves with confidence and get pumped out of your tiny mind. I can’t wait for the World Cups now!