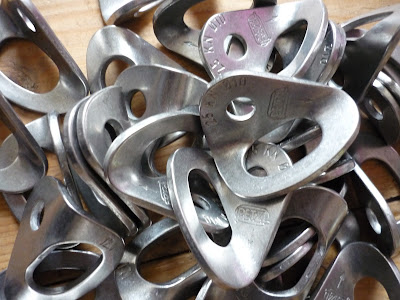 If you are a regular reader of this blog then you will be aware that the summers rock climbing ambitions have long ago been shelved and I have turned my thoughts towards the winter season.
The development of The Works has been coming along steadily and looks like it's going to be an amazing venue for dry tooling in the world of the upside down. This will potentially be the perfect training ground for some of the sport mixed classics in the Alps. There is more development going on and I just received a box of shiny Petzl hangers from the lovely people at Lyon Equipment to crack on with my big project from the back of the cave. The downside being that it's 2 hours drive away - and hence not exactly convenient for the daily sessions I'm going to need to get myself into top form, but I am hoping to go up regularly combined with some trips to Masson Lees which is a fair bit closer. 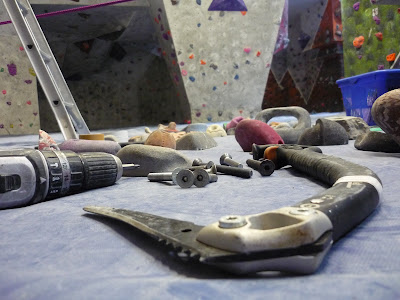 Luckily there are alternatives available. Firstly there is my spare room (I sound like Dave Macleod!!) which has some space for rolling around on the floor doing all that core type stuff and a well appointed pull-up bar with added extras i.e. poles hanging off to simulate hanging onto tools. Unfortunately unlike Dave I don't think I have quite the single minded ability to train in isolation, so I have been fortunate enough to develop a really great relationship with the guys at Rock Over Climbing in Manchester. The guys there are all super keen climbers themselves and equally into winter and so they have been super supportive and allowed me to set some circuits on their wall that I can use my tools on before the centre opens, or on the quiet mornings mid-week when no-one else is around. This is going to be a great help for my training over the next few months. 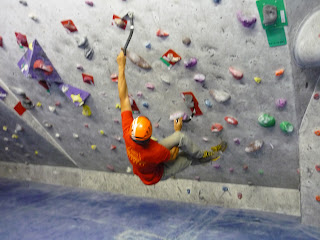 The two I set today on the 50 and 45degree boards are around M8 for the easier one and M9+/M10 for the trickier one. After a quick go on them both today I think they'll be a good start to get me going, and they will link together for some stamina training too. As the problems at Rock Over get changed about every 5 weeks I'll be able to change my circuits regularly and make them harder as the season gets closer.

Lundy plus The Works update


The British summer continues in it's usual way, with a brief hiatus whilst we were away on Lundy. Ok we had a couple of days of poor weather, rain followed by a thick blanket of sea mist. But that was sandwiched in between blazing sunshine and on the final day it being too hot to climb.
Dan and I got a few routes in, Ruth only a couple due to weakness - Ok she was having a bad back week.  I think my favourite route of the week was Redspeed a stunning E2 on the back of the Devil's Slide. Brilliant climbing after a tricky move into the base of a hanging groove. But Carole Ann Butler Corner was great fun too and provided a little haven of shade.

Although the climbing is really great on Lundy it does require quite  a lot of effort in lots of cases, a fair bit of walking followed by some descending down steep grass, then back up when you've gone to the wrong place etc. etc. Luckily as Dan had visited twice before and I've also been once before we managed to avoid getting it wrong too often, but it's not easy to link lots of routes/buttresses together in a single day. Not helped by the current guidebook, in my opinion which although looks really good, with nice pictures and topos, doesn't have the topos in close proximity to the route descriptions and not in a logical place - at least not to my brain!

Back from Lundy it was time to get back involved at The Works. Having managed to climb both First Blood and Bloodline, I wanted to get involved in helping to develop the crag further so out came the Hilti and I spent a couple of days drilling and bolting. Firstly creating a line which starts up First Blood and then heads out left through the steepness to the lower-off of Bloodline. This became Blood Donor (M9ish).  I've also been working on a couple more projects but they aren't ready to climb just yet so I'll be back up north again soon.......once I've gotten hold of some more bolts! Donations are very welcome.
The routes in the First Blood cave are all fully equipped with in-situ draws too which makes life a whole lot easier - thank you DMM.

There is a little video from The Works on my Facebook page thanks to Tom Broadbent for that.