What a difference a day makes..

Since arriving back from Majorca feeling all keen and as though I might have some functioning climbing ability it has pretty much been raining constantly. One morning out bouldering on the grit and an evening down the Torrs has been the sum total of my outside climbing in the last 3 weeks.
A failed attempt to visit Raventor at the weekend preceded another visit to Awesome Walls in Stockport!

However yesterday the forecast looked good, Tom was psyched and I even persuaded Ruth to come out of her climbing hibernation to get on some rock. We headed off early(ish) doors to visit some crags I'd never been too in North Wales, limestone sport crags which are in the latest A55 guide book (nice little guide it is too). We headed to the crags near Dyserth as Tom had to be back by 5pm and they are only about an hours drive from Stockport.
First stop was Ty Newydd, a lovely little spot tucked away in a valley which is used to breed phesant, the crag is gently overhanging and has a number of nice routes between 5 and 8a+. The crag was almost bone dry, with a tiny patch of seepage over on the left end which luckily didn't affect the short 7a+ Black Wednesday, fingery at the bottom and quite powerful at the top, it was very kind of Tom to put the clips in for me!
We then decided to head over to Dyserth Waterfall crag, what an idyllic spot - well it was until the person who lives just opposite the crag decided it was the perfect time to chainsaw down a tree - we feared for the blokes limbs as he wielded said chainsaw with abandon and zero apparent concern for his own safety on a steep brambly banking!
The route to try there was Strawberries Man - it's a Chris Doyle route and I can safely say it's pretty flipping tricky and even having now watched him climb it on youTube I'm not at all sure that I can. The 8a, Madness Reigns looks brilliant and with a cafe at the carpark selling proper ice cream I can see a return visit coming on! Thanks Tom for wearing a bright t-shirt Ruth was complaining about my khaki green number!


Just to finish off the day Ruth and I headed out to the Ashton Cycle circuit for the second race of this year's league, our first. As expected it hurt, although not as much as last time, as they're now running a later, shorter race for 4th category and women - perfect! Or at least for the first few. I did find it a bit alarming with quite a lot of inexperienced  racers being a bit wobbly here and there but at least it was a bit slower! Back next week to try and do better, and hopefully with fewer racers - there were 55 this week which on such a narrow circuit is pretty congested, especially once people start getting lapped and not getting out of the way etc. Still the main aim was not to crash or come last - which we both managed! Result!

Normal weather service has been resumed to day so it'll be back on the plastic tomorrow I expect.........
Posted by Andy Turner at 18:45 No comments:

So Andy is safely on the Emerald Isle getting ready for this evening talk at the University, see post below for details, it means I have free rein to put anything I like in the blog!
So here is the promised Climb article, and if that wasn't enough........

Look how happy Andy is with the new arrival to the household........ 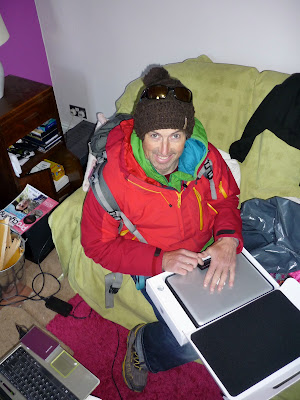 But of course he's disappeared off to Ireland with the old green laptop as we didn't have time to convert the talk to Mac format and left me in custody.....now what can I make the password that he'll never guess?

So here it is the Climb article - Andy is frankly gobsmacked that he hasn't had any banter about this yet - I'd like to declare the floodgates are officially open! 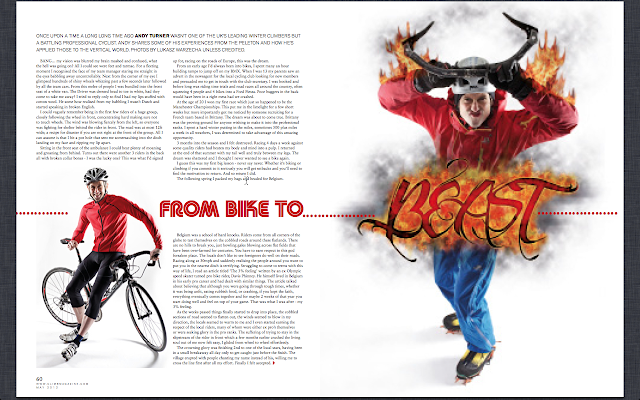 Don't miss your chance for a fun event in Dublin next week, and a bargain at only 5 Euros with a chance to win a Mountain Equipment jacket.
Also Andy will have a supply of Long Hope films available for sale and I'll even get him to sign them - or not if you'd prefer!!

And whilst I'm here.........have you checked out the latest edition of Climb magazine? (May 12) Andy has an article in and even better some highly entertaining photos of him - one involves lycra and another involves flames! I'm not saying another word.................

But I may scan it in the next couple of days!
Posted by ruth at 14:24 No comments:


Why, oh why have I never been on a sport climbing trip before?? I've been sport climbing as an alternative to the lashing rain/snow in the alps but never on a dedicated trip without a single bit of rack or an ice axe in sight. It's been a revelation! I think I've finally begun to understand the fascination with bolted limestone, especially when combined with perfect blue skies and sunshine.
This was my first visit to Majorca, what a top venue - not only is there loads of brilliant climbing all over the island but it's also a total haven for road bikes. Not in all my life have I seen soooooooo many people dressed in lycra - there was definitely a whole host of MAMIL's (middle aged men in lycra) cruising around the place in massive peletons. Strangely most of these peletons didn't really seem to moving at any speed despite some awesome roads. The east side of the island is flat-ish and then there are loads of brilliant alpine style passes on the west side. Ruth and I had taken out our shoes and shorts and were hoping to hire a bike each for at least a day in the middle of the trip when neither of us was working - but neither of the bike hire places in the place we were staying had any bikes free - all 375 bikes were hired out already - well except for a 61cm and 63cm frame - to put that in context Ruth's bike at home is a 49cm and mine is a 56cm.......do people that tall actually ride bikes???

So with bikes out of the equation we were left with acres of perfect limestone - not such a hardship really. Over the course of the 3 weeks we went to a pretty big cross section of crags, the only disappointment was not being able to get to Fraguel, firstly because the road was shut due to a fire and then, if our understanding of the signs was correct, due to shooting going on - didn't really want to risk that particular hazard!
I had decided that I wanted to try and get as much climbing in as possible so didn't want to get myself any big projects, but after having a couple of days of rain and only being able to climb in the super steep crags, I ended up with a couple of routes that I'm going to have to go back for at Les Perxes and Castell de Santueri. I can't pick my favourite crag as they all seemed brilliant so here are my favourite routes.....
Phantomas (7b), Blobland (6c) at Port de Soller
Chorrera (7a) and Columna (7a+) at Puig de Garrafa
Buf! (7a) at Alaro
Psicomambo (6c) at Tijuana
Pasteles de Isabel (7b) at Sa Gubia
Records de Bunyola (6a+) at La Creveta

Now I'm back in the UK and the weather is a bit of a shock to the system although it sounds like it has been for all you people that have been here the whole time I've been away. Fingers crossed for some dryness at least over the easter weekend, maybe I'll sneak a visit to Cheedale, or even Yorkshire, pretty keen to capitalize on the sport climbing roll I've begun - who knows maybe I'll even manage to haul myself up the elusive 8a this year????

Thanks to Vicky Askew for the Buf photos.