It seems to have come around again really quickly but it's festival season already - Edinburgh has already been and gone, Kendal is this coming weekend - I'm not going for any official stuff this year but heading up for the weekend anyway, looking forward to that.

In a couple of weeks time I'm appearing at the Otley Mini Mountain Festival, introducing The Long Hope, talking a bit about it and answering any questions people might have - within reason!!
So if you are in the area I recommend that you go along an support this event - even if you don't want to come and see me chatter on!!

Then just a week later I've been asked to kick off the Winter Lecture series for The Crag Station, check out the flyer below. It would be great to see as many folks there as possible, should be a good season of talks from the local wads! 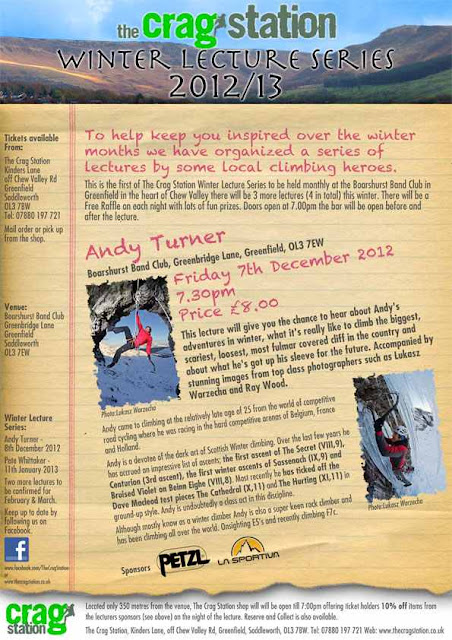 Meanwhile I'm still in the process of bolting the uber project up in the Lakes - it's a mission!!

Guardian of the Underworld

The late summer and autumn has mostly been taking up by dry-tooling. I'd given up on sport climbing and switched my emphasis.
My last post was talking about completing the project at Masson Lees, Rob Gibson had put the bolts in a few years ago but never got around to drilling the route so I set about that and after a few days and some jiggery-pokery to get the rope and quickdraw system sorted I managed to send it at the beginning of October. However I already knew that completing that was a warm-up for the main event up at The Works in the Lakes.
Here I had free rein and created a trio of lines, the first was a route that started up the first 2 bolts of Paddy Cave's First Blood and then headed straight-up to finish at the same lower-off as Bloodline which I called Blood Donor. Then came a line up the right arete of the cave,  I started by drilling but didn't finish getting the bolts in due to lack of resin. Brian Davison finished the bolting and Paddy climbed it last week - not sure what he's called it guess it'll be on his blog at some point?? mountain circles.blogspot.co.uk

MASSIVE thank you to Andrew Rutherford for the photos - they were taken a few weeks back whilst I was working the route. Check out his website here Yes I know chalk bags are wrong but I forgot my gloves!! 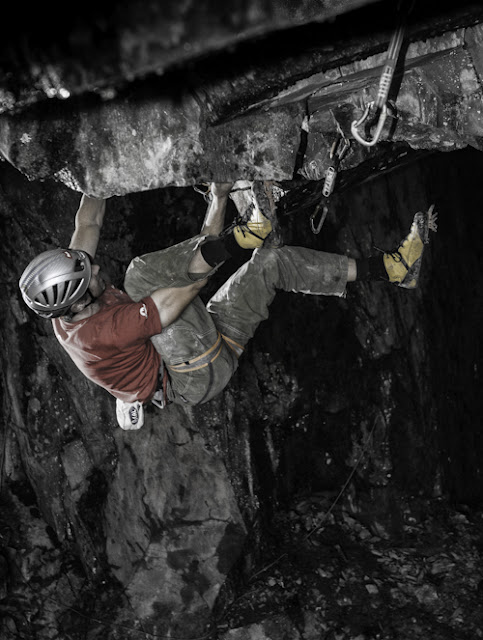 The other reason I didn't get around to finishing that route was the fact that I'd also drilled and bolted one of the other big lines in the cave (see topo here on Tom Broadbents' blog - shown as project) I'd been trying the line over the course of several visits. Finding some cheeky heel toe locks, and struggling on the crux moves which mostly hung on getting the hand placements on my axes sorted out - I even ended up taking off the second trigger on my Ergo's just to give me a tiny bit extra room to enable the hand swops (I definitely don't have delicate ladies hands!!). After working the sequences out the next problem was linking it all together. The route is approx. 25m long, the first 6m up a steep rib and then into the horizontal world of the roof of the cave. It's long and it's pumpy - so I had been doing laps on the route Sub Rosa at Masson Lees to try and get myself some extra power endurance. It seemed to work.
On Wednesday I got myself warmed up and then got on the route, it went like a dream I was feeling smooth and calm and climbing well, until I got to the lower-off. Suddenly with the lower-off quickdraw swinging in front of my face, I tried to clip if 3,4...5 times but just couldn't get the damn rope to go in.....I fell off cursing - I couldn't believe it - my best go ever and foiled by being unable to clip the chains!
I rested and got back on but everything felt wrong, so knowing I was going to be back there the next day I just lowered off and decided to conserve some energy. 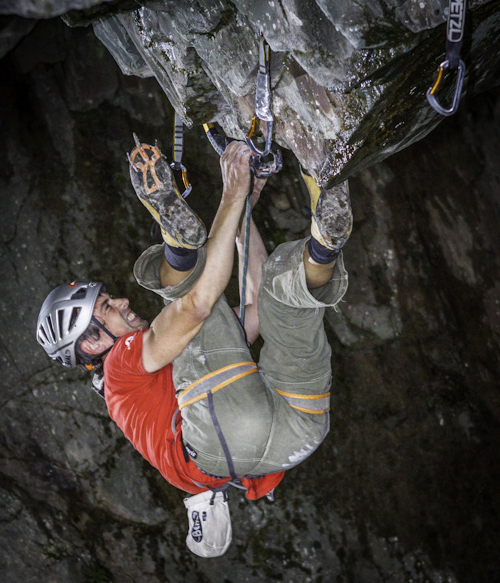 Wednesday night was spent hanging out with family Ashworth in Ambleside - Si and I turned up out of the blue, I think they thought they had some more Trick or Treaters! We definitely got treated though, with Letty plying us with red wine! I figured it might help me relax and sleep, unfortunately Mac wandering around put pay to that theory. 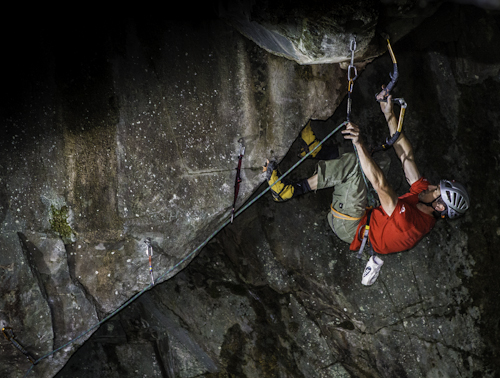 Anyway, morning and November dawned and saw Si and I back in the cave. This was it I told myself, I knew I was on good form and I had also heard a rumour there was a strong scottish team headed down at the weekend - didn't want them nicking my line!! So again after getting warmed up and psyched I set off....... it was a different route!! Gone was the smooth stylish climbing, in came the fighting and sweating and feet popping but somehow the will power was in overdrive, I was not giving up and I found myself again staring at the lower-off only this time the bloody rope went in!!
I think family Ashworth back in Ambleside could probably hear the enormous scream of delight.
Finally the route was completed - I've got the name sorted and it's definitely harder than Marginal Gains, but aside from that I'm not sure I'm qualified to give it a grade, lets see what the next person to climb it thinks.....there's a few folk trying. Answers on a postcard please!

So Guardian of the Underworld is completed I'm ready to start the process of getting another project started - it's Hilti time!!!

Here's a bit of film from Tom Broadbent (thanks Tom) from an earlier attempt on the route - make sure you watch until the end!!!


AT Project Redpoint Attempt.m4v from Andy Turner on Vimeo.
Posted by Andy Turner at 21:15 1 comment: