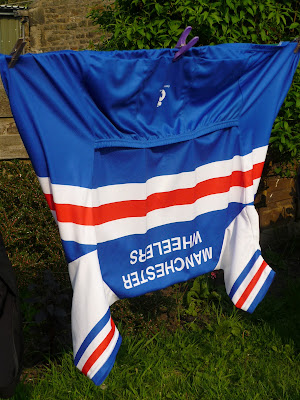 As mentioned in the last post I've been getting back into some bike racing after about an 18 year break. So in the spirit of this I decided to enter the North West Regional Road Race championship race. Carefully chosen as it was being held near Garstang in Lancashire and hence would be pan-flat! Last time I entered this race was back in 1990 when I was young and fit and bursting to get into the big league. That year it was held somewhere in Cheshire and again was flat and by some happy chance (and obviously a fair bit of sweat and suffering) I won it!! The pinnacle of my racing career and the reason I got the opportunity to head off to the continent to race for the following 3 racing seasons. That year I was racing in the big boys race, category 1 as it was then before Elite was introduced above.
My current Race Licence is for a Category 4 racer, so I entered the cat 3/4 race. It's been both fun and frustrating racing in this level of race. Although I'm no where near fit enough to go in the higher levels I find myself frequently frustrated by the level of riding (ie. weaving and wobbling) and tactics in the cat 4 races.
This race was no exception. The field was fairly large with 60 riders allowed, the not too technical race circuit was around some fairly quiet roads and we were escorted by motorcycle marshalls who stopped the traffic as and when it appeared. Luckily the day dawned dry but a bit breezy which could have resulted in the field being blown apart if there had been a team or individual rider who had put in an attack at just the right moment. I could see exactly where the best spot would have been but I didn't have the legs and fitness to do it myself and no-one else either did, or saw the potential.
Riding around in a big bunch of riders can be alarming at times especially when big sturdy chaps decide they are coming through and barge you out of the way. I'm no stranger to a bit of moving people when needed but I definitely felt a couple of times like it was getting a bit hectic.
The race was 5 laps of a approximately 10 mile circuit having been reduced by one lap on the start line (result!!). For the first 4 laps small groups tried to get away of the front of the peleton but no-one managed to make a significant gap and the group stayed together. I was riding in my Manchester Wheelers shirt ( first time in 22 years) and there were 4 other guys from the club there too. Some of them showed on the front a few times, dragging the peleton along but ultimately not really accomplishing much. I decided staying sheltered in the bunch was a way better idea!! Come the last lap things started to hot up and eventually a group of about 6 riders managed to get away and stayed away until the finish (just!). The rest of the group then just wound the pace up and up and up as we neared the finish. There was no full on sprint finish as the pace was already high. I managed to stay up near the front of the group, my legs were screaming and cramping but I gritted my teeth and kept going right to the finish, coming home in 18th place and as the first member of the Manchester Wheelers team.
I have to say I was pretty chuffed overall, and feeling psyched to get some more racing under my belt as the summer goes on. Maybe the old magic will come back in force with a few more miles in the legs????